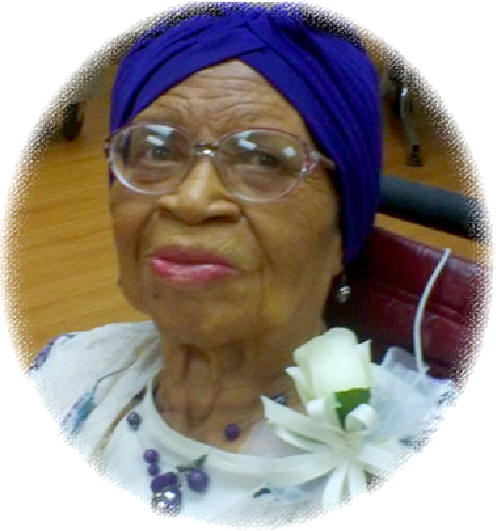 Reverend Bettie Jones Robinson Bones was born August 19, 1922 to the late Reverend Jim and Minnie Holmes Jones. She was the seventh child of eight siblings and all preceded her in death.

In 1956 she met and married O.D. “Baby” Robinson.  After his death, she married Levy Bones, who also preceded her in death.

At the age of 14 she joined the Olive Branch Baptist Church in the Industry Community in Georgiana, Alabama. Later she attended St. Luke A.M.E. Zion Church in Pigeon Creek until moving to Greenville and joining First Missionary Baptist Church where she served as the junior class Sunday school teacher, senior choir member, deaconess, and missionary president.  During her second marriage, she joined Mt. Moriah Baptist church where she continued to work as teacher and missionary. Public speaking gave her the opportunity to witness to others on the saving grace of Jesus Christ.

Reverend Bones was educated in Butler County church schools and Lomax Hannon High School. Her high school studies were halted for years until she decided to complete them through the mail. Upon completion of her studies a graduation ceremony for her was held at Greenville Middle School.

Reverend Bones work history includes doing laundry at a Navy shipyard and local cleaners, pants presser and machine operator at Foster’s and Dozier Manufacturing, and business owner of Bettie’s Kitchen. Upon retirement, she returned to the work force as a volunteer in Butler County Schools in 1992. Most of her work was done at Greenville Middle School as an aide to special needs students. She also worked for Greenville Parks and Recreation Department during the summer months. Later she worked as a  substitute teacher for Butler County Schools.

She was active in her community in clubs and organizations including Butler County Civic League, Aberilla Chapter #170 OES, The National Exchange Club, president of the PTA, and in 1975 founded the Pioneer Women’s Organization and later it became the parent body for a children’s club called CUPS.

When realizing her call to preach, Reverend Bones joined St. John A.M.E. Zion, where she delivered her trial sermon. She later moved her membership to Butler Chapel A.M.E. Zion. She served as supply pastor at Poplar Spring and New Zion A.M.E. Zion Churches. Many evangelistic thrusts were held in the New Zion Church community under her leadership and in conjunction with the Conference Evangelism department. She was ordained deacon on October 8, 2008 by Bishop James E. McCoy.